Celebrate Human Rights Day with us! We will hear presentations touching on subjects such as violence against women, the use of violence in conflicts and the humanitarian consequences that come with it. Presentations will be accompanied by artistic performances, poems and music. Artwork done by victims of violence against women and artists associated with the Sexual Assault Support Centre (SASC) Ottawa will be displayed. Wine and cheese will follow.

Event series organized by the Swiss Embassy in Ottawa and HRREC to mark the 150th Anniversary of the International Committee of the Red Cross (ICRC) and the First Geneva Convention, as well as the 100th Anniversary of the International Prisoners-of-War Agency. The Exhibition “War from the victims’ perspective – Photographs by Jean Mohr” is open to the public until February 10th 2015 in the HRREC offices, 57 Louis-Pasteur (Fauteux 570), Ottawa.

This event is part of the 16 Days of Activism Against Gender-Based Violence Canada campaign (closing event). 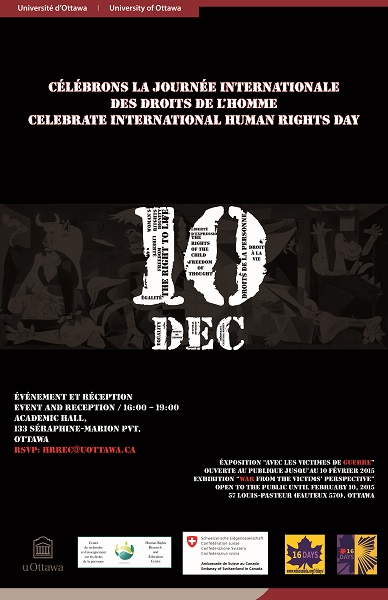